It’s big news that it’s snowing in China.  Our ayi tells us the last time it snowed like this in Shanghai was 17 years ago.  There’s been snow on the ground for a week. 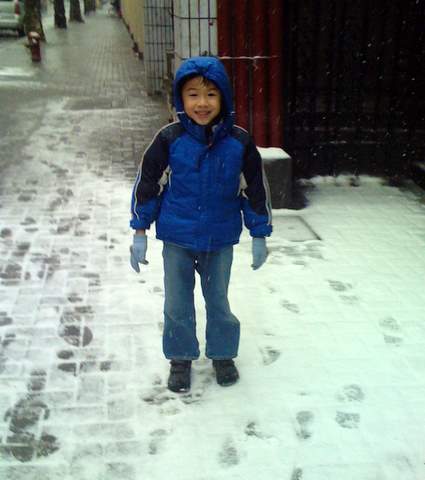 Here are the beautiful views from my office overlooking Jing’An Park: 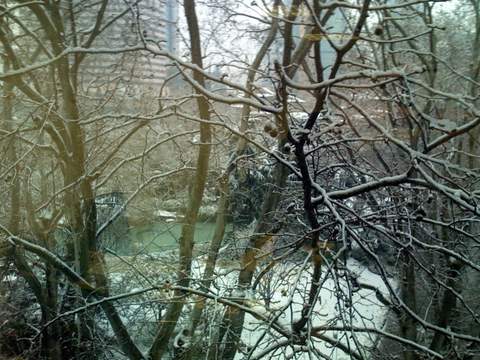 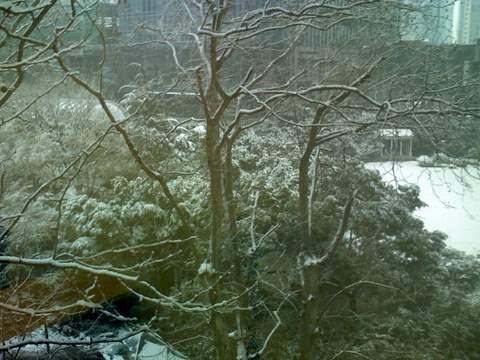 But of course, that’s the fun stuff.  It’s quite cold here obviously.  People say that the “damp air” makes it feel colder.  What’s really bad is that the housing insulation is horrible, and the space heaters are kind of like heating up a room with a hair dryer.

But the really bad news is that the snow is hitting inner China something terrible.

Donate to the China Red Cross.

We also donated to Half the Sky Foundation to help China’s orphanages.

Weâre still trying to get through to a few orphanages.  Weâll provide information regarding those and other orphanages needing help just as soon as we have it.  In general the needs are for fuel, food, disposable diapers, warm clothing and bedding.  Prices are soaring because no goods can be shipped and cold weather has destroyed all winter crops.  Half the Sky is responding to the emergency by getting funds directly to the institutions in a variety of ways.

My cousin-in-law (relationship easily viewable on Geni) Steven gave me the greatest gift - a box of 10 Science Fiction books that he finished reading and thought were good.

I read Dan Simmon’s Ilium and Olympos and thought they were ok.  Interesting take on mixing Greek mythology and science fiction.

But I just finished Spin, by Robert Charles Wilson.  It’s awesome!!  It explores the question of whether we as an “intelligent’ species can plateau our population under the Earth’s sustainable limits.  Check out this page (BTW, this Amazon online reader is pretty amazing); http://www.amazon.com/gp/sitbv3/reader/105-3190140-4479647?asin=0765309386&pageID=S06U&checkSum=71sE6nL2ZoS31e%20ECU/Un2PDw0MedgbfrXCaddbet5Y=.

But it also has really elegant writing, something rare in SF books.  The books starts with the line, “Everybody falls, and we all land somewhere.”  Essentially an optimistic perspective, the cup half full.

I feel a lot of what I am working on is tied together in this book:
Staying connected with Family and Friends - the thread holding the book together - my job at Geni.
Helping the truly poor who cannot help themselves - like a “Fourth” in Spin - my work with Grameen.
Longer term view on how to help our species live sustainably on Earth - the premise of Spin - my work with JUCCCE.

One of our Grameen Shanghai volunteers, Jessica Beaton, has just published an article in this month’s Shanghai Business Review about microfinance in China.   Here is the link to a PDF version (please go to page 30 of the magazine): http://www.sbr.net.cn/issue.pdf

We handed out to everyone a pen and a pad of sticky notes.  We asked them to write down, on their own, any ideas they have for our volunteer organization, 1 idea/note.  Ideas could be big or small.  This took about 15 minutes.  Then, still without discussion, everyone stuck his/her notes on the wall - and here’s the trick - categorized them with other people’s ideas.  We gave no advice on what the categories should be.  Amazingly, after a flurry of initial confusion, the categories self-formed.
Once everyone had sat down again (and quieted down after all the excitement), we gave each category a name, and asked everyone on their own to pick their top 5 categories.  They had 5 points and could spend on the categories any way they wanted - 5 on 1; 2, 2, 1; 1 for 5 different categories).  We tallied up the votes, and basically had a rational and democratic vote of the most important things to do as an organization, in a prioritized list format, which we then can now form committees around.

We’re mentioned in Grameen’s May 2007 eNewsletter!

Our story on how we got involved