The Sichuan earthquake has been distressing.  The only bright side is seeing China and the international community working together to raise funds for the victims.  PayPal is doing it’s small part by offering free payment processing for MSN’s Project Hope.

I was quite proud to hear that eBay was donating a total of 1m RMB, a combination of employee donations, corporate matching program, China Business Unit contributions, and eBay Foundation donation.  Then I heard my friend say Coke donated 10m!

This article is fascinating, explaining the theory that China is suffering through 5 major disasters to balance out the future greatness of the Olympics:
http://www.asiasentinel.com/index.php?option=com_content&task=view&id=1212&Itemid=34

After a great year at Geni, I have decided to return to PayPal China.  My old/new boss Jeff wrote up a perfect return email:

It is with my greatest pleasure to welcome Alan Tien back. Commencing March 3rd, Alan will start his new role in the capacity of Chief Operating Officer of PayPal , reporting directly to me.

Alan is not a stranger to most of us - before he took up the Beibao è´å® (PayPal.com.cn) Country Product Manager role in Shanghai in July, 2005, Alan had been a senior API PM, Merchant Features with PayPal in San Jose since 2002.  Last March, Alan was invited to join and launch Geni.com in China.

For those who knew him well, youâd agree to my characterization of Alan being a person who is not only extremely intellectually bright particularly when it comes to strategic thinking and innovation, but also an entrepreneurial leader with a track record of success - in his 16+ year profession across international product management, marketing and business consulting with both large MNCs and small start-ups, Alan has demonstrated his equal proficiency in technology and business with rapidly increasing management responsibility and leadership scope.

Please join me to welcome Alan Tien back and congratulate him for his new and expanded role with PayPal . Thanks and regards.

Love this picture, taken off Nanjing Lu, center of Shanghai.  Explain to me how this is Good Housekeeping?  It’s MY idea of good housekeeping to have a roomful of beautiful women all dressed up but I don’t think I’m the target market.

Services in China are ridiculously affordable.  In other words, labor is cheap.  We pay our ayi (nanny, maid, cook all in one) double the going rate, and it’s still a great deal, at least half to a quarter of US costs.  We get massages all the time, not just because we invested in Diva Life.  And haircuts include a long massage and hairwash.  Here’s Kyle at our favorite hair salon: 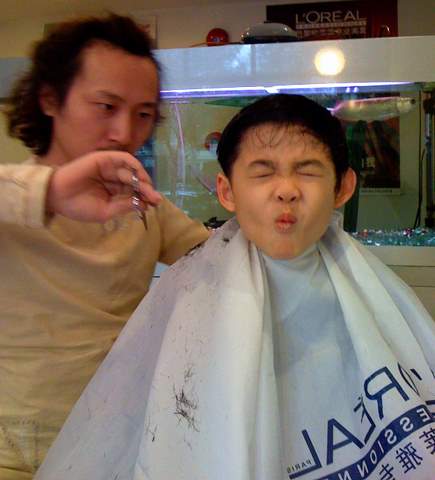 Taxi rides start at 11 RMB.  I still think that’s only slightly more than a dollar, but with the dollar is devaluing so quickly, it’s $1.50 now.  Rides in town center only add a few “kuai” to the bill, so we never worry about bar hopping or visiting friends after we’ve sent our driver home - yes, we have a driver, but it’s really like leasing a car and the driver comes with it.  The great side benefit of cabs is that you can drink and not drive.

Also, there’s no tipping, except included service charges at hotels and fine restaurants.  It’s galling to go back to the US and have to add another 15% onto restaurant bill.  If you try to tip here, half the time they want to give it back to you.  There’s one time when a waiter ran after our party for a block to give the tip back.

Yes we feel spoiled and pampered here.  But it makes up for all the annoyances of living in China, well-documented in the government’s attempt to teach the whole country manners before the Olympics.