The new Beijing airport is pretty sweet.  Same huge hanger space like the Shanghai Pudong airport, but classier inside.  What’s best is the Star Alliance lounge.  Lousy selection of drinks and food but decent space, not confined and claustrophobic.  Nice artwork on display - funny with the ubiquitous Starbucks in the background here: 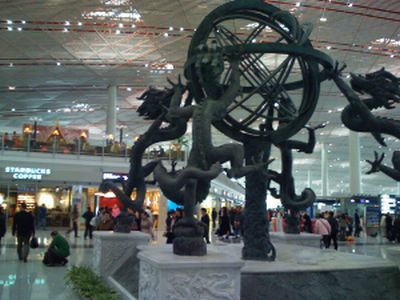 Despite the government’s best efforts to clean up the bad English in China, you still get gems like this one.

There are definitely too many cheap under-valued restaurants here in China so it’s good there’s a few over-valued ones to rip off us foreigners.  I appreciate their forthright marketing approach.  A breath of fresh air in this polluted city.

After a great year at Geni, I have decided to return to PayPal China.  My old/new boss Jeff wrote up a perfect return email:

It is with my greatest pleasure to welcome Alan Tien back. Commencing March 3rd, Alan will start his new role in the capacity of Chief Operating Officer of PayPal , reporting directly to me.

Alan is not a stranger to most of us - before he took up the Beibao è´å® (PayPal.com.cn) Country Product Manager role in Shanghai in July, 2005, Alan had been a senior API PM, Merchant Features with PayPal in San Jose since 2002.  Last March, Alan was invited to join and launch Geni.com in China.

For those who knew him well, youâd agree to my characterization of Alan being a person who is not only extremely intellectually bright particularly when it comes to strategic thinking and innovation, but also an entrepreneurial leader with a track record of success - in his 16+ year profession across international product management, marketing and business consulting with both large MNCs and small start-ups, Alan has demonstrated his equal proficiency in technology and business with rapidly increasing management responsibility and leadership scope.

Please join me to welcome Alan Tien back and congratulate him for his new and expanded role with PayPal . Thanks and regards.

The weather is warming up, and it’s now beautiful in Shanghai.  Kyle and I were walking to Sunny Donuts when I noticed this statue is of a guy named Tien.  Hmm, famous relative of ours??? 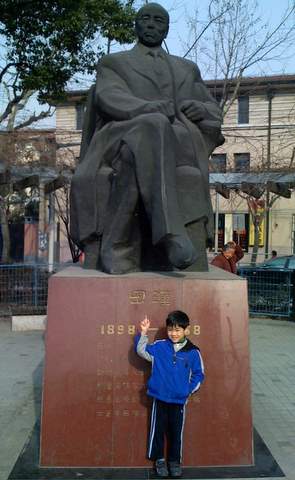 And the DongHu hotel’s outside fountain looked particularly good today…